The Lethal Herbicide Report You Must Learn 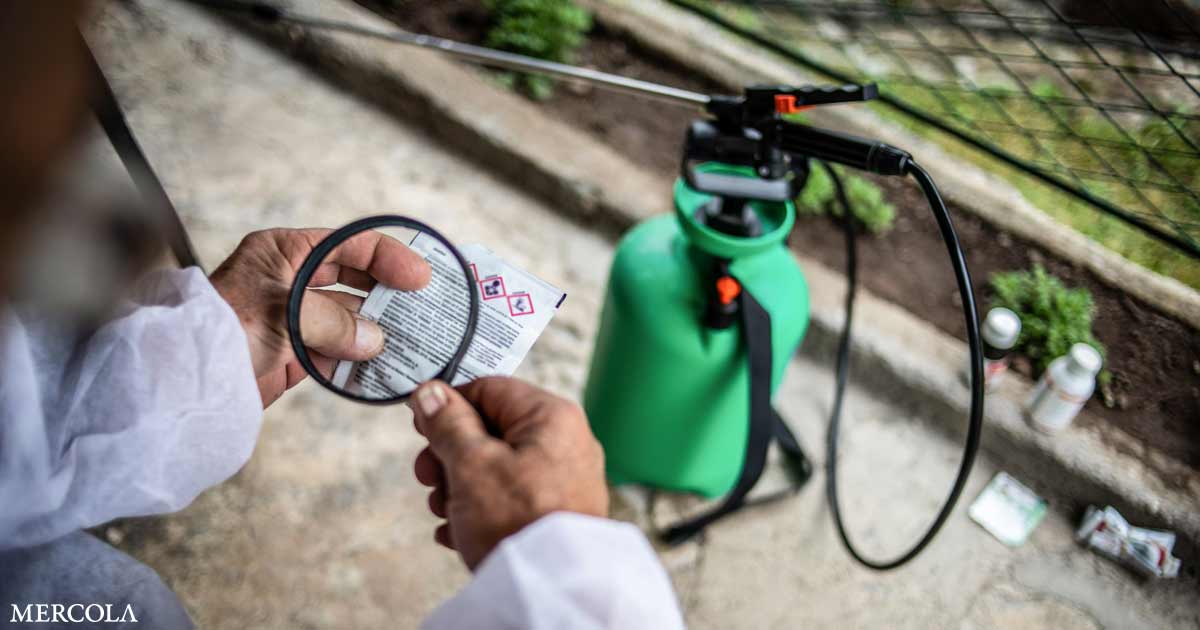 It was 2015 when the International Agency for Research on Cancer (IARC) identified glyphosate, the active ingredient in Roundup herbicide, as a probable human carcinogen.1

Since then, Bayer, which in 2018 acquired Monsanto and all of their Roundup-related legal problems, has faced jury verdicts worth a combined $2.4 billion from people who alleged that exposure to glyphosate caused their cancer, specifically non-Hodgkin lymphoma.2

In June 2020, Bayer agreed to pay between $8.8 billion and $9.1 billion to settle 125,000 Roundup lawsuits that have been filed, which account for about 75% of the Roundup/cancer lawsuits.3 Another $1.25 billion was to be set aside by Bayer to cover future Roundup claims, but despite the settlement — the largest in Big Pharma history — Bayer admitted no wrongdoing.4

Through all of the high-profile lawsuits, the U.S. Environmental Protection Agency remained steadfast in its support of glyphosate. In an assessment on glyphosate, the final draft of which was released in April 2019, the EPA found the chemical “is not likely to be carcinogenic to humans.”5

It turns out, however, that a buried EPA report from 2016 found the opposite — that glyphosate did appear to be linked to non-Hodgkin lymphoma.6

The newly released confidential EPA report7 was included in an exposé by investigative reporter Sharon Lerner in The Intercept, who wrote:8

“The internal report which was marked “confidential,” found that the four highest-quality studies ‘all reported elevated risks of NHL associated with exposure to glyphosate even after controlling for other pesticide exposures’ and concluded that the studies ‘provide suggestive evidence of carcinogenic potential between glyphosate exposure and increased risk of non-Hodgkin lymphoma.’

But the EPA never published this clear expression of concern. Instead, it subsequently released reports in 2016 and 2017 that clearly drew on the earlier document — several sections have identical wording — but reached the opposite conclusion: that glyphosate is ‘not a probable carcinogen.’”

Lerner spoke with Genna Reed, a senior analyst at the Center for Science and Democracy at the Union of Concerned Scientists, who stated that the EPA cherry-picked data from the internal report. “They only used the pieces of the meta-analysis that fit the conclusion they wanted to support … There is clearly a need for more firewalls to prevent political interference with the science.”9

Not only did the EPA continue to support glyphosate’s safety for years after the internal report revealed evidence suggestive of its carcinogenicity, but they went so far as to block warning labels in California when the state announced they wanted warning labels on it within the state.10

As background information, glyphosate was officially added to California’s Proposition 65 list of carcinogens in July 2017, and warning labels stating that glyphosate may cause cancer were supposed to be added to products beginning in the summer of 2018.

The labels, however, were halted when Monsanto challenged the California rule in court. In February 2018, a federal judge temporarily banned California’s plans to add cancer warning labels on glyphosate-based products,11 which the EPA subsequently backed up.

Then, in August 2019, the EPA stated they will “no longer approve product labels claiming glyphosate is known to cause cancer,” adding that that is “a false claim that does not meet the labeling requirements of the Federal Insecticide, Fungicide, and Rodenticide Act (FIFRA).”12

In 2020, California Attorney General Xavier Becerra filed an appeal to challenge the EPA ruling, and it’s possible that the uncovered report may act in the appeal’s favor. According to Sustainable Pulse:13

“Now, with the new internal report contradicting EPA’s public findings — which the Court used as the basis to not require a Prop 65 warning for glyphosate — the appeal can pull the rug out from under the assertion that there is no evidence glyphosate is a carcinogen.”

The EPA, unwavering in their support of glyphosate, re-registered the chemical for another 15 years in 2020.14 Bayer, however, appears to have grown wary after the deluge of lawsuits.

In July 2021, they announced they would be halting residential sales of its glyphosate-based products in the lawn and garden market with “new formulations that rely on alternative active ingredients beginning in 2023.”15 They made sure to point out that the sales will be stopped for purely litigation purposes:16

“This move is being made exclusively to manage litigation risk and not because of any safety concerns. As the vast majority of claims in the litigation come from Lawn & Garden market users, this action largely eliminates the primary source of future claims beyond an assumed latency period. There will be no change in the availability of the company’s glyphosate formulations in the U.S. professional and agricultural markets.”

It’s a positive step in the right direction, but glyphosate will still be available for agricultural markets, which makes up a significant portion of its usage, and can still be sprayed in schools, parks and other public settings.

Farmers may apply glyphosate to agricultural crops such as genetically engineered soybeans at a rate of 0.75 pounds to 1.5 pounds per acre,17 raising serious environmental and public health concerns. Andrew Kimbrell, executive director of the Center for Food Safety, noted in a news release:18

“Bayer’s decision to end U.S. residential sale of Roundup is a historic victory for public health and the environment. As agricultural, large-scale use of this toxic pesticide continues, our farmworkers remain at risk. It’s time for EPA to act and ban glyphosate for all uses.”

Carey Gillam, an investigative journalist, was invited to speak at the Agriculture Media Summit in Kansas City, an event for agriculture and livestock writers. With extensive experience on using data obtained via Freedom of Information Act (FOIA) requests, Gillam was asked to do a presentation about pursuing FOIA request.

However, once her name appeared on the agenda, the sponsors — which included Big Ag names like Syngenta, Corteva and Koch — pushed back and said they did not want her to speak. Gillam had recently written an article for The Guardian about Syngenta potentially misrepresenting data about their paraquat weedkiller.19

Gillam is the author of “Whitewash — The Story of a Weed Killer, Cancer and the Corruption of Science,” and has previously gone on record about how Monsanto tried to discredit her for writing critical pieces about the company and its toxic products.20 In an interview with The Disinformation Chronicle, Gillam spoke about the significant influence of corporations on the media and their role in spreading disinformation and censorship:21

“We’re seeing this more and more with corporate money at play in journalism conferences. Two years ago, I wrote about Bayer seeking influence within the Foreign Press Association and the Foreign Press Foundation.

I had internal documents that showed that, in exchange for very generous donations, Bayer would be involved in setting agendas for journalistic conferences and getting a say in award winners. They were going to pick what kind of stories are applauded and promoted.”

Going even deeper, internal documents from Monsanto’s “intelligence fusion center” revealed a strategic response aimed to discredit journalists or anyone who they deemed a threat by bringing in third-party players.22 “They’ve done this to scientists and many other journalists.

A key example is a front group that calls itself the American Council on Science and Health. These groups do the dirty work so a company can appear above the fray,” Gillam said.23

Gillam shared three internal Monsanto documents with The Disinformation Chronicle, which detail the company’s game plan for making sure their narrative — and their narrative only — is heard. The first, titled “Let Nothing Go,” means that every negative news story or social media post must be countered.

“Anywhere that anything compromising or negative about this company might appear, they wanted someone on their team or a third party to counter it,” Gillam said. “This is why they needed so many different players around the world to be constantly monitoring social media. This continues to happen.”24

The use of third-party players like the American Council on Science and Health is preferable, since it removes Monsanto (or now Bayer) from the conversation, which would clearly be biased, and makes it seem as though safety articles are coming from independent sources.

The second document, “Whack a Mole,” is a nod to “whacking down anybody who is raising any questions or concerns or pointing to any potential problems with Monsanto.”25 Monsanto’s so-called “stakeholder mapping project”26 was first uncovered in France, but Monsanto likely had multiple lists to track people in countries throughout Europe.

The hit lists contained hundreds of names and other personal information about journalists, politicians and scientists, including their opinions about pesticides and genetic engineering.27 Gillam explained:28

“This is what they were doing and they enlisted not only professors, but dieticians and nutritionists. People who have some authority and look independent, but they’re out to whack down anybody who Monsanto doesn’t like.”

The third document references “Project Spruce,” an internal code name for Monsanto’s defense directive to protect the company against all perceived threats to its business,29 including claims that Roundup causes cancer.

“Through Project Spruce they worked with a third party in a deep, coordinated effort to smear, discredit and try to shut down the concerns that Roundup causes cancer,” Gillam said.30

Equally disturbing, she says that internal documents also reveal Monsanto’s efforts to manipulate search engine optimization on Google. As an example, she said that anyone searching for information on her book on Google would instead be directed to negative propaganda posted by the Monsanto-directed third parties.31

Disinformation Is the New Normal

We’re living through a time when access to independent information and science is getting increasingly more difficult to find. If you want to learn about the real health risks of herbicides like glyphosate or pesticides also used in the ag business, you can’t rely on Bayer or the EPA but, rather, must dig beneath the surface.

It’s an unfortunate fact but an important one, and it applies not only to information about herbicides, fungicides and pesticides but virtually any topic of importance. Gillam knows this all too well, and she offers the following advice for anyone seeking the truth:32

“If you’re a reader, you just have to take everything with a grain of salt and do your best to check, and double check, and triple check it. Go directly to the source.

Look up and read research papers for yourself, and try to see if the source of information you’re relying on has some questionable connections that may bias the information … This is a really frightening age of disinformation, and we all have to be very careful and cautious when we are trying to discern the truth.”

The Many Medicinal Advantages of Hashish and Cannabidiol (CBD)

There’s Simply One Drug to Deal with Monkeypox. Good Luck Getting It.