Situations for the subsequent COVID-19 variants: the SAGE doc 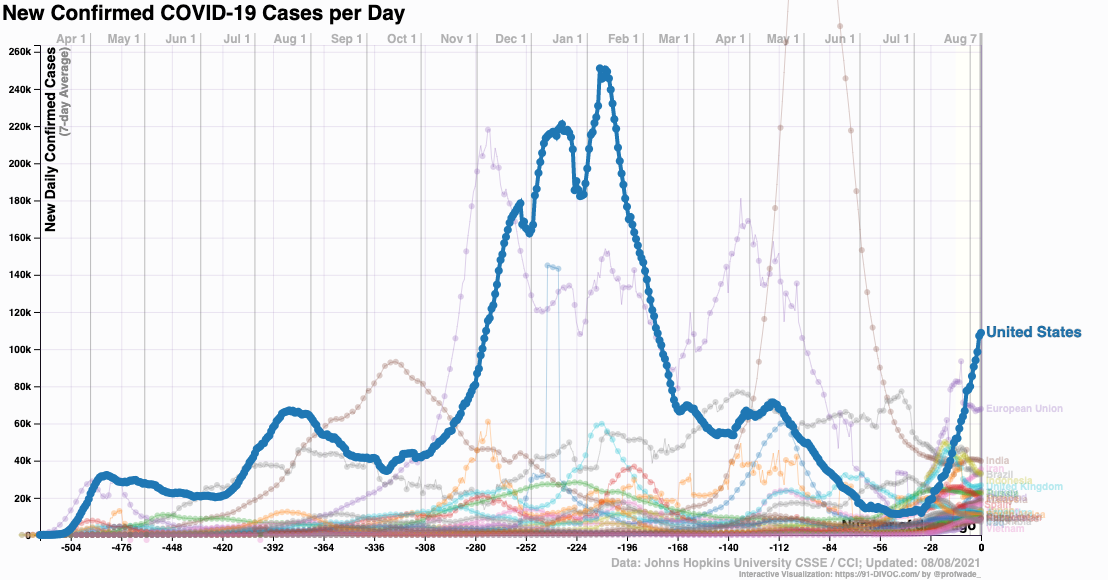 What will COVID-19 develop into?  What variants should we expect?

I’d like to continue my futures exploration of the pandemic today by focusing on a set of scenarios recently published by Britain’s Scientific Advisory Group for Emergencies (SAGE).  It’s an interesting document, sharing a range of possibilities well grounded in current epidemiology, from what I can understand. These potential futures are ones colleges and universities need to consider as they plan for 2021-2022.

Let me summarize and excerpt them here, then develop some implications for higher education.

COVID-19 status as of this post, via Johns Hopkins.

SAGE’s method – implied, but not fully stated – seems to focus on several scenario variables: virus transmissibility, lethality, and ability to escape vaccines, all driven by mutations to the virus’ shape and contents.

“Scenario One: A variant that causes severe disease in a greater proportion of the population than has occurred to date.”  In other words, this new COVID variant injured and kills more people and a greater range of us.  SAGE offers two modern analogies to help us visualize how terrible this could be: “For example, with similar morbidity/mortality to other zoonotic coronaviruses such as SARS-CoV (~10% case fatality) or MERS-CoV (~35% case fatality).”

35%. Think about that – out of every infected group, about one third dies.  And SAGE considers this to be a “[r]ealistic possibility.”

“Scenario Two: A variant that evades current vaccines.” In other words, the vaccines we’re taking now don’t work as well in blocking transmission and illness.  William Haseltine dubs this one a ““vaccine-busting variant.”  The Delta and Lambda variants are early examples of it.

Note that this could occur by a virus jumping from humans to animals, mutating in those new hosts, then returning to humans again.

“Scenario Three: Emergence of a drug resistant variant after anti-viral strategies.”  Similar to number two, but also more dangerous for therapy and treatment.

“Scenario Four: SARS-CoV-2 follows an evolutionary trajectory with decreased virulence.”  This is a positive development, with COVID-19 weakening over time.  It wouldn’t disappear, just become less and less transmissible and damaging.

The first three are dangerous and frightening. SAGE deems them to be have a decent likelihood of occurring (1+2 are “Realistic possibilit[ies]“, 3 “Likely – unless the drugs are used correctly“). Scenario four is benevolent – but, alas, not so likely to happen soon. (“Unlikely in the short term, realistic possibility in the long term.“)

COVID infections by nation to date, with US emphasized, via DIVOC-19.

Overall, what is to be done?  For many of the scenarios SAGE recommends similar responses: reducing transmission through nonpharmaceutical interventions (NPIs) (i.e., masking, social distancing, lockdowns, etc.); continuing to offer current vaccines, worldwide; developing and administering vaccine boosters; extensive monitoring of humans (and animals) for variants; rapid development of new vaccines; stockpiling therapeutic drugs; investing in AI for long-term use.  In case of scenario three, SAGE recommends not giving people as many antiviral drugs as we now do.

As scenarios, it’s important to remember that they are not only visions of possible futures, but attempts to influence the present. One BBC account reflects that these scenarios seem less likely to occur in that country, given dropping case rates, but might represent an attempt to scare people into better public health behavior.

What does this mean for higher education?

It depends on the scenario.  If scenario one occurs, we face the choices presented in summer 2020: close campuses and shift to remote instruction, or attempt in-person education with major on site protocols to reduce infections?  Increased lethality, and range of most injured victims, means a greater proportion of the academic community can be directly hit. If death tolls reach MERS levels I would hope all campuses would shut down in-person operations, but the pandemic experience shows clearly that many colleges and universities can follow other logics.

Scenarios two and three present similar, familiar choices for postsecondary institutions. Do we invite populations back on campus and trust in our individual mixtures of vaccination, testing, and NPI to keep most of us safe?  Or do we return back online and take major financial hits?

Scenario four is a path back towards normalcy. COVID-19 becomes like the seasonal flu. We want people to take their vaccines. Some will get sick, and a few die. But socially we deem this to be acceptable.  Face to face instruction returns and many try their best to recapture fall 2019.

Academic research appears to be essential for the world in every scenario, especially the first three. This suggests that colleges and universities divert more resources to relevant programs, even if they are suffering financially overall.

Which of these seems most likely to occur?  How do you think they might impact academia?