4 futures for increased schooling after neoliberalism 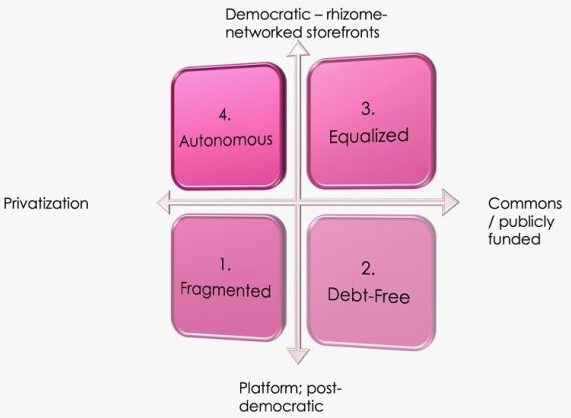 How might higher education change if society moves beyond the neoliberal order?

Scholar Chris Newfield recently published a fine set of scenarios for future colleges and universities.  It is very much worth your time to explore.  Here I’ll set the stage and sketch it out as an introduction.

Newfield is the great scholar of how American states have defunded public higher ed.  In a series of books he has investigated the politics and economics in great detail: Ivy and Industry: Business and the Making of the American University, 1880-1980, Unmaking the Public University: The Forty-Year Assault on the Middle Class, and The Great Mistake: How We Wrecked Public Universities and How We Can Fix Them.  He spoke on the topic brilliantly with the Future Trends Forum in 2017:

He uses this research to build out a futures vision in a recent Radical Philosophy article.

“Universities after neoliberalism: A tale of four futures” starts with a classic four-scenario creation process.  To explain: one way to generate a scenario is to assume one or several change drivers are at work, then extrapolate a future vision based on their taking effect.  For example, what might America look like if health care became its leading economic sector? We can go further and pick out a trend whose outcome we find hard to determine, then identify two opposite ways it could go, creating two scenarios from that.  For example, the internationalization of higher education: more global or more local?

What Newfield has done is more ambitious and, in full disclosure, something I find to be a lot more fun to do.  He starts with one basic assumption, that the neoliberal world order (dating back to the fall of the Soviet Union or earlier, to Thatcher and Reagan) is in popular crisis:

under the pressure of international social forces, neoliberalism is increasingly breaking down. These forces include the Covid-19-induced public health crisis, the climate emergency, multiple modes of racism and neo-colonialism, and the grinding effects of economic inequality.

Chris gives examples to show how this is starting to play out:

Neoliberalism has fractured in places like Hungary and Turkey, where it is being replaced by an authoritarian form of national capitalism. Something like that was happening in the US under Donald Trump, who sponsored a new round of tax cuts while denouncing trade liberalisation. At the same time, the liberal centre, incarnated by ‘third way’ New Democrat Joe Biden, has been backing away from the tradition that runs from Reagan and Thatcher through Clinton, Obama and Blair.

Starting from that, the article picks out two trendlines, privatization and platform, pushing each to extremes: much more privatization versus much less, more traditional democracy against decentralization and local autonomy.  Then the author places these two pairs against each other to form a quadrant, yielding four futures formed by where each polar extreme connects with the others’, or four possible universities:

(Tracing this out is a great, intense, and creative exercise.  Strongly recommended.)

What they look like: “Fragmented Decline” (#1 in the drawing above) is what happens when privatization accelerates and today’s democratic politics persists.   That means increased administrative management in colleges and universities, along with more debt and stratification by race and economics.  “Debt-Free College” (#2) is also based on continuing today’s democracy, but then goes in the opposite direction with higher education funding, as the name signals.

On the top half of the chart we flip to the other political pole.  Now things are decentralized and local autonomy is key.  “Funding Equalised” (#3) ends privatization. In that world social movements drive a massive change in higher education finance, shifting resources from wealthy institutions and families to schools and students who need it most.  “Autonomous” or “Abolitionist” maintains privatization but demolished our current academic order, replacing it with many small, self-run educational entities “with fully non-capitalist and decolonised processes of higher learning.”

How does this play out?  What are our options now for shaping higher education towards or away from each of those scenarios?  Might the future consist of blends or connections between them? Read the whole piece and find out.

I do want to offer a few observations on the side:

The “Autonomous” or “Abolitionist” university focuses on indigenous practices and history more than the other three.  It also reminds me of various left anti-authoritarian educational currents from the past century, from Ivan Illich to anarchism and Summerhill.

Newfield does good work in reversing some usual causal chains.  He thinks, for example, that universities are not just passive expressions of social forces, but have the ability to carve out new directions on their own.  Similarly, he doesn’t see college as giving graduates an economic boost, so much as identifying and supporting those already riding high:

The advertised result of a B.A. degree is entrance to a good, fulfilling job and a stable financial future – in the US, it was the ‘American dream’ of a middle class life, supposedly still offered to a multi-racial student population.  The actual result of a B.A. degree is the limiting of this kind of affluence to a smaller elite – without expressly denying B.A. access to everyone else…

The actual result is cross-racial and cross-class inequality of opportunity.

There are some clever formulations, like this: “We talk quite a bit now about the gig economy. One of its enabling conditions is the gig academy.”

Now, over to you.  What do you think of the four Newfield scenarios?

The Constructing Blocks of Private Identification for Web3