Ethereum Versus Bitcoin: A Story Of Two Blockchains, Can Ethereum Eclipse Bitcoin? 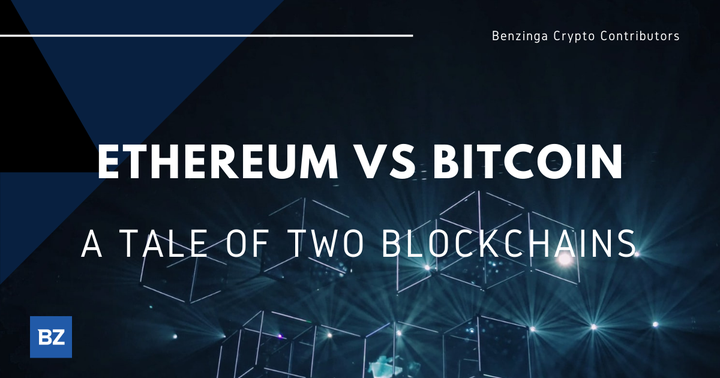 Cryptocurrencies are built under an internal structure of code known as a blockchain. This blockchain serves as the underlying basis of every transaction/application. They allow users to anonymously send cryptocurrencies from one wallet to another in the nodes of a cryptocurrency’s network. These transactions or applications are not monitored from a third-party organization like an exchange, instead, it takes place on its network utilizing its decentralized coding language. This is why no transaction can be traced back towards either the sender or the receiver

Bitcoin’s blockchain operates under the Turing Incomplete coding language. It allows for anonymous transactions through Bitcoin wallets in their network. It is a decentralized network with no 3rd party monitorization other than the network itself and is the oldest generation of blockchain technology.

Ethereum’s blockchain is written under the Solidity coding language. Like Bitcoin, it is a decentralized form of transactions. However, Solidity is widely regarded as the second/newer generation with the new technology allowing for software applications and transactions to take place through Ethereum’s network. This allows for the everyday investor to use Ethereum for business purposes while allowing software engineers to create and store applications in DAPPS or decentralized applications. This allows for peer-to-peer messaging on top of peer-to-peer transactions.

Smart Contracts have increasingly become popular over time. As of now, there have been 1.5 million Smart Contracts issued. According to Cointelegraph, deployed smart contracts have tripled in the month of March alone. This momentum seen widely throughout Ethereum’s platform will give it the potential to increase in value in the near future.

Smart Contracts have changed the way people negotiate or trade digital goods or services on the blockchain. They allow for more volume between trading while breaking down previous barriers. Smart Contracts have allowed for people to securely agree and trade on a global network at speeds never before imagined. Ethereuem’s network will inevitably become increasingly popular due to its DAPPS which will give users the ability to make and use applications while still having a source of authority from the Smart Contracts. The functionality of Smart Contracts and its ability to function without an intermediary will inevitably make Ethereum more popular in the future while increasing its value.

In addition, more transactions have a direct correlation to the value of the cryptocurrency.

It is important to note that Bitcoin’s overarching goal was to allow for peer-to-peer transactions. And despite Bitcoin’s use as a currency becoming increasingly popular, especially in Salvador, Bitcoin has not been able to get the global usage it hoped for. Ethereum on the other hand, dominates Smart Contract transactions and because of it, has been viewed as the cryptocurrency of the future.

The number of Smart Contracts continuing to rise year after year will make Ethereum more valuable in the eyes of investors thus increasing its price (potentially further than Bitcoin).

As of now, Ethereum’s mining happens in a concept known as Proof of Work. In Proof Of Work, miners will compete against each other in order to add another block at the end of Ethereum’s blockchain. After hours of complex math equations, miners can potentially not have their block validated throughout the entire blockchain due to competition which is seen throughout Bitcoin’s mining process making it very energy inefficient.

This system of competing and mining is incredibly bad for the environment. This results in unnecessary wasted energy for the miners who were not fast enough to mine the block. Wasted energy depletes resources while costing miners hefty electrical bills. Miners will inevitably have lower outputs due to this heavy competition between each other.

Ethereum’s newest update otherwise known as Ethereum 2.0 will adopt a new concept known as Proof of Stake. In Proof Of Stake, this competition between miners is eliminated which results in reduced energy consumption by 99 pct. Instead of competition, miners will essentially take turns mining blocks to prevent any sort of competition whatsoever which will increase the output of each miner. Reduced energy leads to fewer operational costs that consequently lead to more miners which will inevitably increase Ethereum’s value.

Ethereum 2.0 will allow for greater and more efficient mining on a global network. Greater efficiency will inevitably allow for more Ethereum to be mined due to its convenience. The more Ethereum is mined, the higher the value of the cryptocurrency will be.

How Proof Of Stake Will Affect Ethereum

The chart above demonstrates that mining difficulties have a polar correlation to the price of Bitcoin. In other words, when Bitcoin is harder to mine, the price of the cryptocurrency decreases. This suggests that a cryptocurrency that is easier to mine like Ethereum after the update, will increase in value. It is also important to note that Ethereum without the update, is already far more environmentally friendly compared to Bitcoin.

Ethereum without the update is almost 5 times more efficient. As seen in the previous chart, mining efficiency has a correlation to the cryptocurrency’s value. This suggests that as Ethereum’s mining process becomes more efficient, the value of the currency will increase which can potentially allow it to strive further than Bitcoin.

NFTs, otherwise known as Non-Fungible-Tokens, have become increasingly popular with more than $533 million worth of NFTs having been sold in the past. One NFT alone sold for $69 million at auction. NFTs are digital art that can be bought and sold with cryptocurrencies. Most if not all of NFTs have been sold via Ethereum’s Blockchain due to its revolutionary technology which cannot be done on Bitcoin’s blockchain.

Ethereum’s blockchain allows for NFTs to be stored, bought, and exchanged on various NFT marketplace platforms, a feature that Bitcoin cannot match. In addition, Etherum allows for NFT transactions to take place securely on their network making it easier to distinguish the owner of each NFT from counterfeiters. Ethereum’s role in NFTs will allow it to prosper in the future.

The NFT market is forecasted to double by October of 2021. This is due to increasing popularity on a global scale. NFTs are only capable of being bought and sold on Ethereum’s blockchain due to their Smart Contracts and Dapps. Ethereum’s role in NFTs will allow it to prosper in the near future.

How NFTs Will Affect Ethereum’s Value

Like Smart Contracts, NFTs have a correlation to the price of Ethereum. And to many analysts like myself, this correction happens in essentially the same way. As mentioned before, NFTs are stored, sold, and bought on Ethereum’s blockchain.

This means that a higher volume of NFTs transactions being bought and sold leads to an increase in the price of Ethereum. This happens because investors see a stronger underlying Ethereum network powering the industry and thus recognize the value within the Ethereum cryptocurrency. Consequently, as the number of NFTs continues to rise just like Smart Contracts, Ethereum’s value will increase as well. It is evident that NFTs will allow for Ethereum’s value to prosper, potentially further than Bitcoin.

Ethereum from a technical perspective is quite bearish.

The RSI for Ethereum is overbought at 66.97 under the 1-year time frame. The RSI being valued incredibly high is a major turn factor towards investors. The MACD on the other hand is slightly bullish with a slight overlap insight. However, the bullishness of the MACD does not override the bearishness of the RSI. In terms of the key levels, Ethereum is coming off a support line reaching its resistance which is bearish. From a technical perspective, Ethereum is bearish.

In my opinion, Ethereum has more room for growth and potential compared to Bitcoin. Bitcoin’s blockchain which only allows for decentralized anonymous transactions is nothing compared to Ethereum’s smart contracts, proof of stake, and role in NFTs. In the long run, it is not hard to see why Ethereum’s more functional and innovative network will inevitably eclipse Bitcoin’s older and limited blockchain.

In my opinion, people determine the price of a stock/cryptocurrency based on their underlying perceived value of the equity. If people see value in something, the demand and price of it will increase exponentially. However, if investors see no tangible value in something, the value of it will decrease dramatically. This is seen in many cases of hyperinflation where citizens lose faith in the value of their currency. Bitcoin having no tangible value has long been a point for criticism of its network due to its limited platform and older blockchain. To many position traders, owning Bitcoin is quite worrisome because they don’t see the tangible value within its network. Ethereum on the other hand, has an expansive computer network to double as the underlying structure of its increasingly popular cryptocurrency. This is why Bitcoin is seen solely as a cryptocurrency while Ethereum is connected towards a larger network.

In addition, the cryptocurrency community and I have noted that Bitcoin has not had the greatest reputation over the years thus pushing hesitant investors away from the network. Bitcoin has long been a favorite for cybercriminals and scammers online. Despite Ethereum having decentralized autonomous transactions like Bitcoin, criminals demanding ransom have consistently chosen Bitcoin thus tarnishing its reputation. An example is the Colonial Pipeline hack where the Russian hackers demanded Bitcoin for ransom.

As an analyst, it is important to weigh both the cons and the pros. As I mentioned earlier, Ethereum from a technical perspective is not looking very strong as compared to its fundamental side. However, despite the technical analysis being bearish, its fundamental long-term network will allow for Ethereum to continue to grow year after year despite its current valuation. On the contrary, I do recommend investors to wait until Ethereum reaches its support level after it retraces from its resistance to buy-in.

In my opinion, It is evident that Ethereum will eclipse Bitcoin in the near future from my analysis.

Deel
Facebook
Twitter
Pinterest
WhatsApp
Vorig artikelDEI In Workforce Not But A High Concern With Enterprise Leaders Globally; Ideas To Assist Change That
Volgend artikelNon-E.U. guests to France can get a well being move to enter social venues.