American life expectancy declined, largely as a consequence of COVID-19 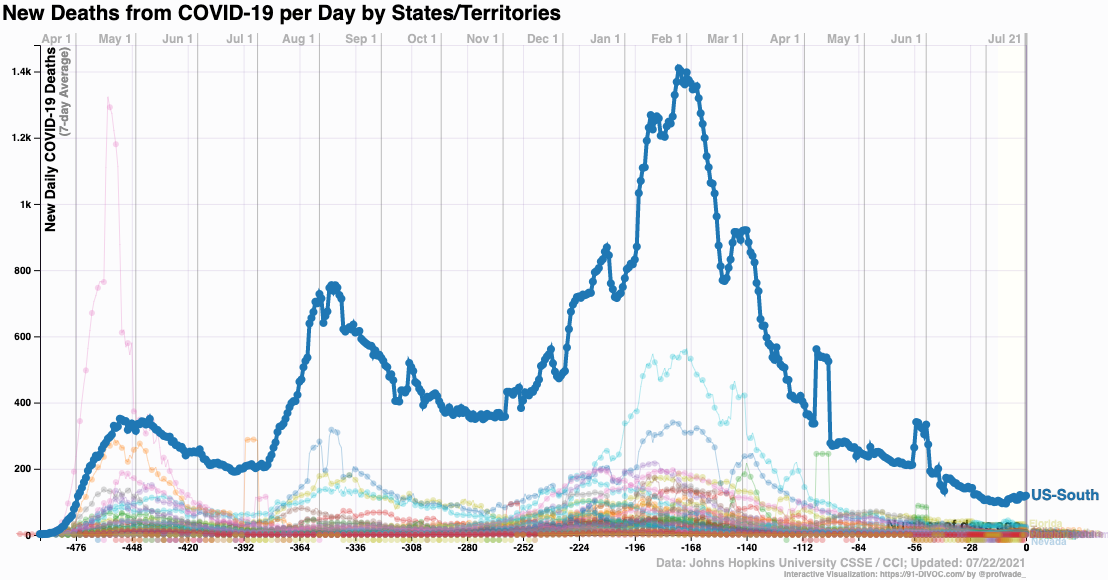 For years I’ve used a certain phrase in presentations.  It came up when I was describing modern demographics.  I would explain how lifespans have increased in developed nations, and that more people will live longer, and then want on to explain what this meant for higher education.   Then I’d pause and mention that this was likely to keep happening, unless something truly extraordinary happened.  Like, say, a plague.

Now we’re in the second year of COVID-19.  As I write this the pandemic has killed at least 4,109,303 people worldwide, according to the World Health Organization (WHO).  That’s at least 607,289 dead in my country, according to its Centers for Disease Control (CDC). In India the official statistics may be grossly wrong, with the actual death rate for that nation being nearly as high as the published global number, according to a new study.

What caused the downturn? COVID-19, primarily:

Mortality due to COVID-19 had, by far, the single greatest effect on the decline in life expectancy at birth between 2019 and 2020, overall, among men and women, and for the three race and Hispanic-origin groups shown in this report.

The report breaks down all causes thusly:

(For those non-COVID reasons, I wrote about this in 2019, pointing to research about deaths of despair among the poor and/or undereducated.)

CDC broke down the new data by gender:

The decline hit all races, albeit unevenly:

The Hispanic population experienced the largest decline in life expectancy between 2019 and 2020 (3.0 years).

What does this mean for the future?

It depends on if we see this as the start of a long term trend or not.  If we do, then the 2010s were a peak lifespan for the US.  Consider this CDC graph as evidence for such a turning point:

Imagine that sharp downturn on the right edge continuing for years.

To make the case for such a future one would have to show that the deaths would continue.  That could be driven by continued COVID-19 mortality, which isn’t happening now (in the US) as the most vulnerable (seniors with comorbidities) are largely protected. We are seeing more hospitalizations, which means more “long COVID” (longterm injuries) which could lead to more deaths.  Further, the death toll may turn out to be worse if we can prove the year’s excess deaths were actually COVID-caused.  Or more variants could become more lethal.  Having us lose what I’ve called the race between variants and vaccines would make this scenario even more likely.

Adding to its likelihood would be more deaths of despair. That’s only a fraction of the pandemic’s butcher’s bill, but they do occur and aren’t slowing down.  I would also add deaths due to the climate crisis, starting with casualties from extreme weather (floods, heat waves, storms) and moving on to chronic conditions worsening thanks to the climate.

On the other hand, the 2020 life expectancy drop could be a historical blip. 2021 has seen COVID deaths fall pretty steadily after January, according to 91-DIVOC:

While the delta variant is booming, it seems to mostly be spreading infections and injuries without immediate fatalities. That’s due to improving treatment but also to the great vaccination rates of the most vulnerable. As for deaths of despair, they have given rise to some (if not widespread) political outrage, which may translate into better care, or even social support.

The biggest mortality question in my mind is climate change – and that’s the topic for another post.