A Return to Freedom, After Almost a 12 months Trapped Indoors Beneath Lockdown 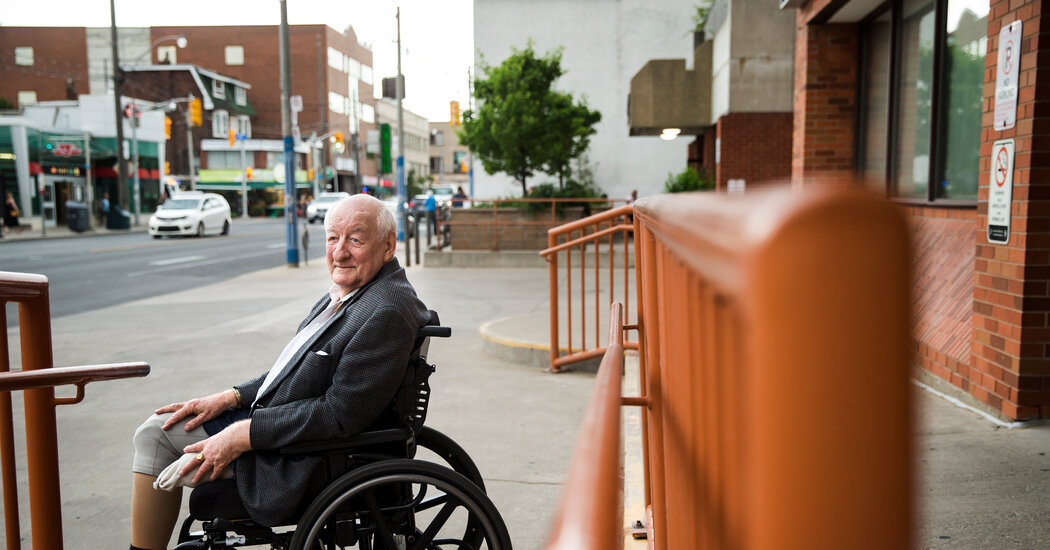 TORONTO — Ted Freeman-Atwood, 90, rolled out of his tall brick nursing home in his wheelchair, wearing a blue tweed jacket with a white handkerchief peaking from its breast pocket. “This is the farthest I’ve traveled since last year,” he told the manager of his favorite restaurant two blocks away, who greeted him by name.

It was a beautiful day in June. The sky clear, the sun generous and Toronto’s streets alive. After eight months of near-constant, government-enforced closures, small storefronts flung open their doors to customers and restaurant patrons spilled out from sidewalk patios onto the road.

It was Mr. Freeman-Atwood’s first real outing since August 2020; his second since the coronavirus pandemic began.

He ordered a glass of pinot grigio, explaining how he hadn’t tasted that pleasure in almost a year because “the joint I live in doesn’t want drunk old men pawing girls after 5 p.m.”

Toronto — the city labeled “the lockdown capital of North America” by the national federation of small businesses — was giddy with liberty and freedoms that many had considered chores back in February 2020.

Since December, gatherings in the city — even outdoors — had been banned, filling the city with a sense of loneliness. No one felt this more acutely than residents of Toronto’s nursing homes. Ground zero for the pandemic’s cruel ravages, they account for 59 percent of the country’s Covid-19 deaths. As a result, they also became the most fortified. Locked down since last March, most facilities refused all visitors for months.

For all but five weeks between March 2020 and June 2021, care home residents in Toronto were not permitted to leave their buildings for nonmedical reasons, not even a stroll. Many compared themselves to caged animals or prisoners. The lucky ones lived in residences with attached courtyards, where they could at least feel the sun on their faces.

Mr. Freeman-Atwood was not among the lucky ones.

The child of a British army general and a mother from Newfoundland, Mr. Freeman-Atwood had lived a large, roaming life. He traveled around the world as a child and spent most of his adulthood in Rio de Janeiro, where he eventually became president of Brascan, a large Canadian firm that owned the biggest hydroelectric utility in the Southern Hemisphere, until he negotiated its sale to the Brazilian government.

In 2012, Mr. Freeman-Atwood moved into the Nisbet Lodge, a Christian nonprofit long-term care home in Toronto’s busy Greektown neighborhood. He’d suffered five aneurysms in 10 years, and had one leg removed because of bad circulation. After gangrene eventually set into the remaining leg, the doctors amputated that one, too.

His second wife had died from cancer, and he’d stubbornly refused an offer from his only child, Samantha, to take him in.

“I’m too much of a bloody nuisance,” he explained. “I’m in a wheelchair. I can’t get up or downstairs. Why should I inflict that on her?”

Before the pandemic, Mr. Freeman-Atwood regularly met Samantha, his son-in-law and two grandsons for lunch at nearby restaurants; he visited the bank and local cheese shop; and once a week, he wheeled his way to the liquor store for some wine, which he would smuggle back to his room.

Then, in March 2020, he lost what was left of his relatively independent lifestyle. He survived an outbreak in the home, during which 35 staff members and 53 residents tested positive. Four residents died. Mr. Freeman-Atwood tested positive, but experienced no symptoms.

He could no longer see his daughter, who found the trips to the building to drop off cookies and supplies for him heartbreaking.

On regular phone calls throughout the winter and spring, Mr. Freeman-Atwood’s only complaint was boredom. Sometimes, the sound of his neighbor moaning in pain echoed hauntingly in the background.

During the pandemic, Canadian geriatricians sounded an alarm about “confinement syndrome.” Residents in nursing homes were losing weight, as well as cognitive and physical abilities because of social isolation — concerning given that even in nonpandemic times most residents die within two years of arriving at a care home.

Mr. Freeman-Atwood tried to stay busy. He had three newspapers delivered on Saturdays, tabulated the tax returns for four people in the spring and completed 300 exercise repetitions each morning before getting out of bed.

A big day for him was a rare trip to the building’s dining room on the top floor, where he could speak to one young waitress in German, a language he had perfected in 1956 in Austria, when he worked doing the accounts of an aid group tending to Hungarian refugees.

He met his first wife, who was also working with refugees, in Vienna. “We were young enough to think we were doing good,” he said.

As the pandemic dragged on, Mr. Freeman-Atwood also revealed some vulnerable moments.

In late March, he was presiding over a second-floor meeting of the residents’ council, which he has led since moving in. Outside, the city was in early bloom, the forsythia bushes glowing an electric yellow of promise. In an instant, the sun spilled through the windows.

“It was drawing us out, calling, ‘Come out, come out, come out and play,’” said Mr. Freeman-Atwood. “‘You’ve had your two Moderna jabs, why can’t you come out?’ The answer is, ‘No, the rest of the world hasn’t. And when will that be, nobody knows.”

Canada’s nursing homes were the first places to receive the country’s vaccines and by February, every resident of these homes in Ontario had been offered a first dose. Still, the restrictions did not change.

Government officials were “so burned by poor performance, the last thing they wanted is to be that minister who allows more bad things to happen,” said Dr. Samir Sinha, the director of geriatrics at Sinai Health System and University Health Network in Toronto. He was among those lobbying the government this past spring to relax its restrictions.

“At this point,” he said, “the risks of loneliness and social isolation are far greater than dying from Covid in these homes.”

Though the Delta variant has reached Ontario in recent months, it has not caused the damage — or shutdowns — as seen in other parts of the world, in part because of the high rate of vaccinations. Eighty-two percent of the province’s eligible population has received at least one vaccine dose, as of Aug. 11.

When Mr. Freeman-Atwood finally emerged in June, it wasn’t to go on a grand voyage. His dream outing was much simpler. He rolled into a dollar store a block from his building to peruse the cheap watches, since his had broken. “Do you remember me?” he asked the man behind the counter. He was like a shipwreck survivor, giddy from the joys of basic social interaction.

“This is my first time outside in a year,” he exclaimed.

The restaurant patio bubbled with noises, like an awakening orchestra. The music from speakers threaded with boisterous conversation. A toddler at a neighboring table screamed; her parents explained this was her first time at a patio.

On the way back to his building, he pushed past storefronts that hadn’t survived the pandemic; “For Sale” signs posted in their dusty windows. The sky was turning a bruising purple; storm clouds were gathering.

Mr. Freeman-Atwood said he didn’t know how long these freedoms would last, or whether we’d pay for them. But he was already planning another outing.

New and Noteworthy: What I Learn This Week—Version 189

Does Worry of Contagion Make Us Illiberal and Compliant?